Habitat: Found all over decidious forests in India.

Uses: It is Antiscorbutic, Carminative, Alterative and Nutritive. It is used in colisting diahorrea, dysentary, constipation and diarrhoea. It is aromatic, astringent, cooling, febrifuge and also acts as tonic for heart and brain. 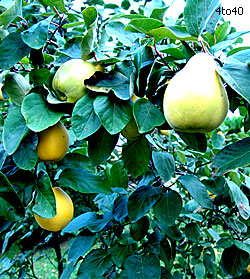 The Quince or Cydonia oblonga, is the sole member of the genus Cydonia and native to warm-temperate southwest Asia in the Caucasus region. It is a small deciduous tree, growing 5–8 m tall and 4–6 m wide, related to apples and pears, and like them has a pome fruit, which is bright golden yellow when mature, pear-shaped, 7–12 cm long and 6–9 cm broad.

The immature fruit is green with dense grey-white pubescence, most of which rubs off before maturity in late autumn when the fruit changes colour to yellow with hard, strongly-perfumed flesh. The leaves are alternately arranged, simple, 6–11 cm long, with an entire margin and densely pubescent with fine white hairs. The flowers, produced in spring after the leaves, are white or pink, 5 cm across, with five petals.

Four other species previously included in the genus Cydonia are now treated in separate genera. These are the Chinese Quince Pseudocydonia sinensis, a native of China, and the three flowering quinces of eastern Asia in the genus Chaenomeles. Another unrelated fruit, the Bael, is sometimes called the “Bengal Quince”.

The fruit was known to the Akkadians, who called it supurgillu; Arabic safarjal “quinces” (collective plural). The modern name originated in the 14th century as a plural of quoyn, via Old French cooin from Latin cotoneum malum / cydonium malum, ultimately from Greek, kydonion melon “Kydonian apple”. The quince tree is native to Iran, Armenia, Azerbaijan, Georgia, and was introduced to Croatia, Turkey, Serbia, Republic of Macedonia, Albania, Greece, Romania and Bulgaria.

Quince is frost hardy and requires a cold period below 7 °C to flower properly. The tree is self fertile, however yield can benefit from cross fertilization. The fruit can be left on the tree to ripen further which softens the fruit to the point where it can be eaten raw in warmer climates, but should be picked before the first frosts.

Most varieties of quince are too hard, astringent and sour to eat raw unless ‘bletted’ (softened by frost and subsequent decay). They are used to make jam, jelly and quince pudding, or they may be peeled, then roasted, baked or stewed. The flesh of the fruit turns red after a long cooking time. The very strong perfume means they can be added in small quantities to apple pies and jam to enhance the flavour. Adding a diced quince to apple sauce will enhance the taste of the applesauce with the chunks of relatively firm, tart quince. The term “marmalade”, originally meaning a quince jam, derives from “marmelo,” the Portuguese word for this fruit. The fruit, like so many others, can be used to make a type of wine.