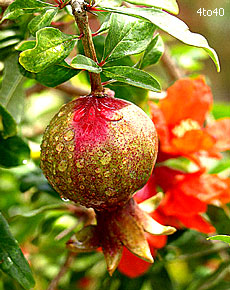 Steeped in history and romance and almost in a class by itself, the pomegranate, Punica granatum L., belongs to the family Punicaceae which includes only one genus and two species, the other one, little-known, being P. protopunica Balf. Peculiar to the island of Socotra.

Despite its ancient background, the pomegranate has acquired only a relatively few commonly recognized vernacular names apart from its many regional epithets in India, most of which are variations on the Sanskrit dadima or dalim, and the Persian dulim or dulima. By the French it is called grenade; by the Spanish, granada (the fruit), granado (the plant); by the Dutch, granaatappel, and Germans, granatapfel; by the Italians, melogranato, melograno granato, pomo granato, or pomo punico. In Indonesia, it is gangsalan; in Thailand, tab tim; and in Malaya, delima. Brazilians know it as roma, romeira or romazeira. The Quecchi Indian name in Guatemala is granad. The Samoan name is limoni. The generic term, Punica, was the Roman name for Carthage from whence the best pomegranates came to Italy.

An attractive shrub or small tree, to 20 or 30 ft (6 or 10 m) high, the pomegranate is much-branched, more or less spiny, and extremely long-lived, some specimens at Versailles known to have survived two centuries. It has a strong tendency to sucker from the base. The leaves are evergreen or deciduous, opposite or in whorls of 5 or 6, short-stemmed, oblong-lanceolate, 3/8 to 4 in (1-10 cm) long, leathery. Showy flowers are home on the branch tips singly or as many as 5 in a cluster. They are 1 1/4 in (3 cm) wide and characterized by the thick, tubular, red calyx having 5 to 8 fleshy, pointed sepals forming a vase from which emerge the 3 to 7 crinkled, red, white or variegated petals enclosing the numerous stamens. Nearly round, but crowned at the base by the prominent calyx, the fruit, 2 1/2 to 5 in (6.25-12.5 cm) wide, has a tough, leathery skin or rind, basically yellow more or less overlaid with light or deep pink or rich red. The interior is separated by membranous walls and white spongy tissue (rag) into compartments packed with transparent sacs filled with tart, flavorful, fleshy, juicy, red, pink or whitish pulp (technically the aril). In each sac, there is one white or red, angular, soft or hard seed. The seeds represent about 52% of the weight of the whole fruit.

The pomegranate tree is native from Iran to the Himalayas in northern India and has been cultivated since ancient times throughout the Mediterranean region of Asia, Africa and Europe. The fruit was used in many ways as it is today and was featured in Egyptian mythology and art, praised in the Old Testament of the Bible and in the Babylonian Talmud, and it was carried by desert caravans for the sake of its thirst-quenching juice. It traveled to central and southern India from Iran about the first century A.D. and was reported growing in Indonesia in 1416. It has been widely cultivated throughout India and drier parts of southeast Asia, Malaya, the East Indies and tropical Africa. The most important growing regions are Egypt, China, Afghanistan, Pakistan, Bangladesh, Iran, Iraq, India, Burma and Saudi Arabia. There are some commercial orchards in Israel on the coastal plain and in the Jordan Valley.

It is rather commonly planted and has become naturalized in Bermuda where it was first recorded in 1621, but only occasionally seen in the Bahamas, West Indies and warm areas of South and Central America. Many people grow it at cool altitudes in the interior of Honduras. In Mexico it is frequently planted, and it is sometimes found in gardens in Hawaii. The tree was introduced in California by Spanish settlers in 1769. It is grown for its fruit mostly in the dry zones of that state and Arizona. In California, commercial pomegranate cultivation is concentrated in Tulare, Fresno and Kern counties, with small plantings in Imperial and Riverside counties. There were 2,000 acres (810 ha) of hearing trees in these areas in the 1920’s. Production declined from lack of demand in the 1930’s but new plantings were made when demand increased in the 1960’s.