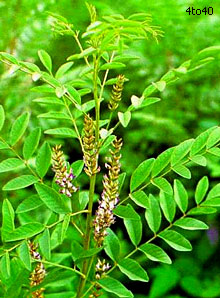 Liquorice (British English) or Licorice (American English) is the root of Glycyrrhiza glabra, from which a sweet flavour can be extracted. The liquorice plant is a legume (related to beans and peas), native to southern Europe and parts of Asia. It is not related to Anise, Star Anise or Fennel, which are the source of superficially similar flavoring compounds. It is an herbaceous perennial, growing to 1 m in height, with pinnate leaves about 7–15 centimeters (3–6 in) long, with 9–17 leaflets. The flowers are 0.8–1.2 cm long, purple to pale whitish blue, produced in a loose inflorescence. The fruit is an oblong pod, 2–3 centimeters (1 in) long, containing several seeds. The flavor of liquorice comes mainly from a sweet-tasting compound called anethole (“trans”-1-methoxy-4-(prop-1-enyl)benzene), an aromatic, unsaturated ether compound also found in anise, fennel, and other herbs. Additional sweetness in liquorice comes from glycyrrhizic acid, an anti-viral compound significantly sweeter than sugar.

Liquorice grows best in deep, fertile, well-drained soils, with full sun, and is harvested in the autumn, two to three years after planting.

In modern times, liquorice extract is produced by boiling liquorice root and subsequently evaporating most of the water. In fact, the name ‘liquorice’/’licorice’ is derived (via the Old French licoresse), from the Ancient Greek glukurrhiza, meaning ‘sweet root’. Liquorice extract is traded both in solid and syrup form. Its active principle is glycyrrhizin, a sweetener more than 50 times as sweet as sucrose which also has pharmaceutical effects.

Use in Alternative Medicine

In traditional Chinese medicine, liquorice is commonly used in herbal formula to “harmonize” the other ingredients in the formula and to carry the formula to the twelve “regular meridians” and to relieve a spasmodic cough.

In herbalism it is used in the Hoxsey anti-cancer formula, and is a considered adaptogen which helps re-regulate the hypothalamic-pituitary-adrenal axis. It can also be used for auto-immune conditions including lupus, scleroderma, rheumatoid arthritis and animal dander allergies.