Uses: The roots are bitter, refrigerant, depurative, diuretic, emmenagogue, abortifacient and trichogenous and is useful in burning sensation, leprosy skin diseases and amenorrhoea. It is used in pre mature graying of hair. Henna is widely used for drawing tattoos, arts and designs. Leaves are useful in wounds ulcers strangury cough, bronchitis, dysentery etc. The fruit is thought to have emmenagogue properties. 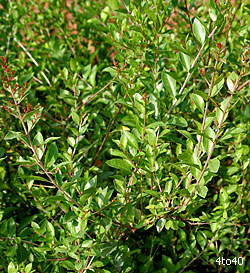 Henna or Hina is a flowering plant, the sole species in the genus Lawsonia in the family Lythraceae. The word “henna” comes from the Arabic name for the plant, pronounced or colloquially. It is also an islamic name given to girls which means blessed.

It is native to tropical and subtropical regions of Africa, southern Asia, and northern Australasia in semi-arid zones. Henna is a tall shrub or small tree, 2–6 m high. It is glabrous, multibranched with spine tipped branchlets. Leaves are opposite, entire, glabrous, sub-sessile, elliptical, and broadly lanceolate (1.5–5.0 cm x 0.5–2 cm), acuminate, having depressed veins on the dorsal surface. During the onset of precipitation intervals, the plant grows rapidly; putting out new shoots, then growth slows. The leaves gradually yellow and fall during prolonged dry or cool intervals. Henna flowers have four sepals and a 2 mm calyx tube with 3 mm spread lobes. Petals are obvate, white or red stamens inserted in pairs on the rim of the calyx tube. Ovary is four celled, style up to 5 mm long and erect. Fruits are small, brownish capsules, 4–8 mm in diameter, with 32–49 seeds per fruit, and open irregularly into four splits. Lawsone content in leaves is negatively associated with the number of seeds in the fruits.

Henna, Lawsonia inermis, produces a burgundy dye molecule, lawsone. This molecule has an affinity for bonding with protein, and thus has been used to dye skin, hair, fingernails, leather, silk and wool. Henna’s indigenous zone is the tropical savannah and tropical arid zone, in latitudes between 15° and 25° N and S from Africa to the western Pacific rim, and produces highest dye content in temperatures between 35°C and 45°C. It does not thrive where minimum temperatures are below 11°C. Temperatures below 5°C will kill the henna plant. The dye molecule, lawsone, is primarily concentrated in the leaves, and is in the highest levels in the petioles of the leaf. Products sold as “black henna” or “neutral henna” are not made from henna, but may be derived from indigo (in the plant Indigofera tinctoria) or Cassia obovata, and may contain unlisted dyes and chemicals.

Though henna has been used for body art and hair dye since the Bronze Age, henna has had a recent renaissance in body art due to improvements in cultivation, processing, and the emigration of people from traditional henna using regions.

In the King James Version of the Bible, the book Song of Songs / Song of Solomon refers to henna as “camphire.” Modern English translations, however, render the word as “henna”.

In the Indian subcontinent, there are many variant words such as Mehndi in Northern India, Pakistan and Bangladesh. In Kannada it is called as Madarangi. In Telugu (India, Malaysia, USA), it is known as “Gorintaaku.” In Malayalam, a language spoken in the southern Indian state of Kerala, it is known as “Mailanji.” In Tamil (South India, Singapore, Malaysia, Sri Lanka) it is called “Marudhaani” and is used as ground fresh leaves rather than as dried powder. It is used in various festivals and celebrations. The paste is left on the skin from a few hours to overnight and the stain can last a few days to a month depending on the quality of the paste, individual skin type and how long the paste is allowed to stay on the skin.