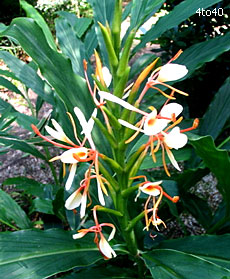 Hedychium spicatum is a smallish hardy ginger that grows to around 1 m, with green leaves and large orange and white flowers. It is also known as Spiked Ginger Lily, Sandharlika, Kapur kachri and Takhellei (Manipuri).

It is an annual perennial herb growing to 1.5m by 0.7m. It has a horizontal root- stock, and tuberous rootfibres, leaves are 30 cms or more in length. Inflorescence is spiked. Flowers ascending and dense yellow coloured. It bears flowers in October. The flowers are hermaphrodite (has both male and female organs).

Its rhizome is used for treatment of asthma and internal injury. Powder of rhizome is used as an antiseptic agent and as poultice for various aches and pains. The rootstock is carminative, emmenagogue, expectorant, stimulant, stomachic and tonic. It is useful in the treatment of liver complaints, and is also used in treating fevers, vomiting, diarrhea, inflammation, pains and snake bite. The root is used in Tibetan medicine, it is said to have an acrid taste and heating potency. It is digestive, stomachic and vasodilator. It is used in the treatment of indigestion and poor circulation due to thickening of the blood.

The dried rhizome of the plant contains essential oil, starch, resins, organic acids and a glycoside; albumen and saccharine are also present. The essential oil has ethyl ester of p-methoxy cinnamic acid, d-sabirene cineole, sesquiterpenes and pentadecane methyl paracumarine acetate. It contain, ß-sitosterol and its ß-D-glycoside.

In preliminary pharmacological studies the drug is found to have a vasodilatory effect on coronary vessels, mild hy-potensive property and a non-specific antispasmodic effect on smooth muscles. Studies on the essential oil of the rhizomes of Hedychium spicatum reveal that these oils possess a mild tranquilizing effect of short duration. They depressed the conditioned avoidance response, rotarod performance and potentiated pento-barbitone hypnosis and morphine analgesia in rats. The crude ethanolic extract of rhizomes possesses anti-inflammatory and analgesic activity. The anti-inflammatory activity was mainly localized in the hexane fraction from which 1% of pure active constituent was isolated. The analgesic activity was more prominent in the benzene fraction. Some other minor active constituents were also present which may contribute to the total activity of rhizomes.

The root stalk is useful in local inflammations, nausea, asthma, bronchitis, hiccups and in pain. The rhizome of the plant is said to be carminative, stimulant and a tonic. It has been described as useful, specially as an antiasthmatic agent. Clinical trials have been conducted in tropical eosinophilia,with promising results. It counteracts had mouth taste and smell.