Uses: It is Diaphoteric, Anti periodic, Stimulating, Expectorant and Anti-catarrhal. It is used in malaria, catarrh, bronchitis and gastric disorders. It also lowers blood sugar levels and its powder is used for mouth ulcers. It is widely worshiped in India. 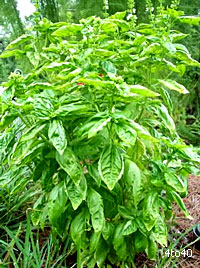 Basil (Ocimum basilicum) of the Family Lamiaceae (mints), is a tender low-growing herb. Basil is a culinary herb prominently featured in Italian cuisine, and also plays a major role in the Southeast Asian cuisines of Thailand, Vietnam, Cambodia, and Laos. The plant tastes somewhat like anise, with a strong, pungent, sweet smell.

There are many varieties of basil. That which is used in Italian food is typically called sweet basil, as opposed to Thai basil, lemon basil and holy basil, which are used in Asia. While most common varieties of basil are treated as annuals, some are perennial in warm, tropical climates, including African Blue and Holy Thai basil.

Basil is originally native to Iran, India and other tropical regions of Asia, having been cultivated there for more than 5,000 years.

The word basil comes from the Greek (basileus), meaning “king”, as it is believed to have grown above the spot where St. Constantine and Helen discovered the Holy Cross. The Oxford English Dictionary quotes speculations that basil may have been used in “some royal unguent, bath, or medicine”. Basil is still considered the “king of herbs” by many cookery authors.

Basil graphic A member of the large mint family, basil is known botanically as Ocimum basilicum. It has long been used as an embalming and preserving herb, found in mummies of ancient Egypt. Perhaps because of its embalming usage, basil was also a symbol of mourning in Greece where it was known as basilikon phuton, meaning magnificent, royal or kingly herb.

Most likely basil is native to India, but there are some indications it may have originated even farther east. Ancient records from 907 A.D. indicate sweet basil in the Hunan region of China. It migrated westward as whole plants, since it could be grown easily indoors away from frost exposure. Basil is also known as St. Joseph’s wort.

Today, basil is not only used as a food flavoring, but also in perfumery, incense and herbal holistic remedies.

Several other basils, including some other Ocimum species, are grown in many regions of Asia. Most of the Asian basils have a clove-like flavour that is generally stronger than the Mediterranean basils. The most notable is the holy basil or tulsi, a revered home-grown plant in India and Nepal. In China, the local cultivar is called while the imported varieties are specifically called, although often refers to another different kind plant- parsley.

Lemon basil has a strong lemony smell and flavour very different from those of other varieties because it contains a chemical called citral. It is widely used in Indonesia, where it is called kemangi and served raw, together with raw cabbage, green beans, and cucumber, as an accompaniment to fried fish or duck. Its flowers, broken up, are a zesty salad condiment.

Basil suffers from several plant pathogens that can ruin the crop and reduce yield. Fusarium wilt is a soil-borne fungal disease that will quickly kill younger basil plants. Seedlings may also be killed by Pythium damping off.

A common foliar disease of basil is gray mold caused by Botrytis cinerea, can also cause infections post-harvest and is capable of killing the entire plant. Black spot can also be seen on basil foliage and is caused by the fungi genus Colletotrichum.