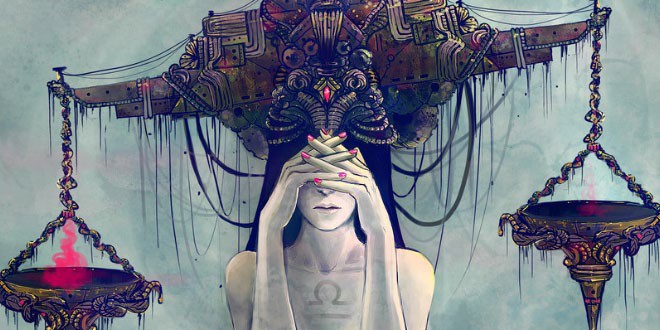 Libra is the seventh astrological sign in the Zodiac. It spans the 180–210th degree of the zodiac, between 180 and 207.25 degree of celestial longitude. Under the tropical zodiac, Sun transits this area on average between (northern autumnal equinox) September 23 and October 22, and under the sidereal zodiac, the sun currently transits the constellation of Libra from approximately October 16 to November 17. The symbol of the scales is based on the Scales of Justice held by Themis, the Greek personification of divine law and custom. She became the inspiration for modern depictions of Lady Justice. The ruling planet of Libra is Venus.

Libra is one of the three zodiac air signs, the others being Gemini and Aquarius. Personality traits often associated with people born under the sign of Libra include: harmonious, seeking justice and balance, intellectual, refined and concerned with relationships.

There is no possible way your love life will be quiet in February, Libra. Not a chance. If you’re completely single, then get ready for a major awakening to your heart! On February 4 a New Moon will illuminate your romance sector, stimulating the potential for you to meet someone new in the most unexpected way. If you already have an idea of who this new romantic prospect is, then he or she will be unusual in some way — or, downright weird. And yet, this is exactly what will draw you to him or her the most. Does this new love affair have staying power? That remains to be seen. One thing is for certain however: you will be very stimulated!

If you’re in a relationship already then there is absolutely an unexpected plot twist happening in your love life story this month. On February 13 Mars and Uranus join forces in your partnership sector, bringing a significant event into your life. It can most certainly be a wrecking ball that hammers your partnership out of the seemingly clear blue sky, but this is not going to necessarily destroy your relationship entirely. What it will do is serve as a wakeup call for what needs to change so that you and your partner can remain a viable couple. It could also mean a sudden break-up, though, but if that’s the case you probably knew all along that you and your partner weren’t solid. Mars and Uranus together are not known for stability, so if things are already shaky, you can expect an explosion.

In other news, after February 14 you might start to feel slammed with expenses. If you’re in a relationship then it’s also possible you and your partner will fight about money, and this trend might last through March 31. On a positive note, however, you will certainly feel a dogged determination to create the most secure financial foundation possible. Because of this, you’ll work relentlessly to make any necessary changes when it comes to money.

From February 18 – 22 there might be serious business to tend to on the home front. You and your clan could be working together to figure out a harmonious solution to a serious family dilemma. This might involve the care of an elderly or sick relative, or be more of a financial problem. Another possibility is that you’re experiencing a literal family crisis and someone in your tribe needs serious support and structure. You’ll be the one with the capacity to demonstrate guidance, authority, and love in the right combination.

By the time of the February 19 Full Moon however, you might feel emotionally and mentally exhausted. It’s not easy being the person who carries the weight of many others. While you are usually such a giver Libra, the Universe wants to remind you that you can’t run on empty. It’s time to recharge your spiritual batteries and take a time out. It’s not an indulgenceit’s a requirement.